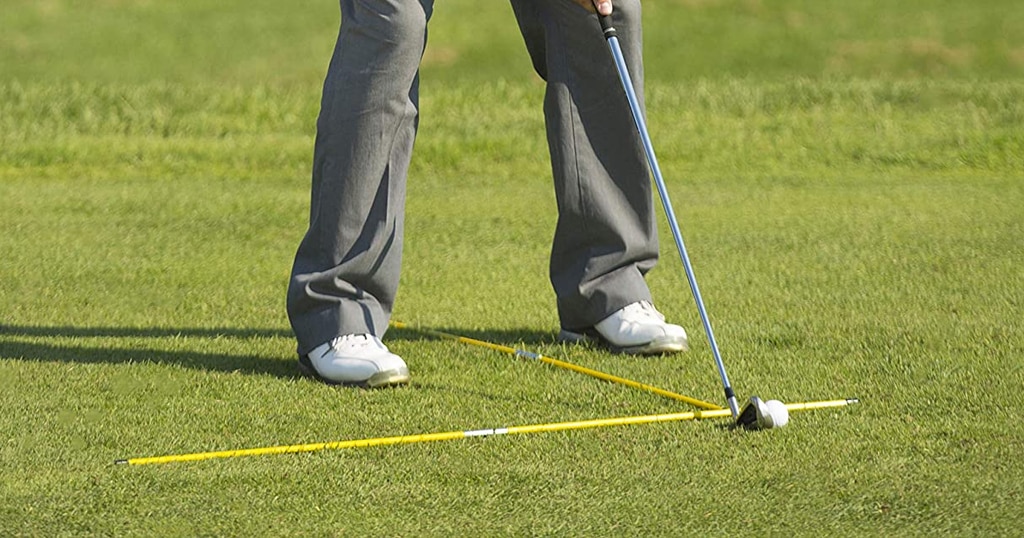 This isn’t going to be a 2,000 word article on the best golf alignment sticks. I’m not here to waste your time.

Go here and pick whichever alignment sticks you like the look (and price) of. Because it’s not the alignment stick that’s important, it’s what you do with it.

Bottom line: alignment is one of golf’s key fundamentals. And practicing your alignment is critical to improving your game. The alignment stick you choose to do that with is not.

So I’m going to be mainly focusing on alignment itself, and some of the best drills to work on with your alignment sticks.

But let me start with a quick anecdote from a recent round with one of my golf buddies.

Poor alignment means your shot is ruined before it begins

My friend (I’ll call him Paul because that’s his name) was having a horrendous day on the tee.

Paul normally plays a reliable fade, but on this day every drive was a big pull to the left. Either straight left, or starting left, then hooking further left. It was ugly.

I watched him silently on the front nine, but by the tenth tee (and at least the tenth ball) I decided I had to say something.

His alignment was all off. And he had literally zero chance of making a good swing.

Normally Paul aligns to the left side of the fairway, which is good practice for his stock shot shape. If it goes straight he’s on the left edge. If it fades he’s in the middle. If it slices he’s got the whole fairway to play with and even a big slice will probably only be in the right rough.

But for some reason, on this day, his feet and body were aligning to the right side of the fairway, and his clubface was slightly closed to the path (i.e. aiming inside the line of his body).

This is a draw setup. And I’ve never seen Paul draw a ball in his life, so it was easy to work out what was happening.

On the downswing, his subconscious could sense the swing path was way out to the right. And in a last minute effort to stop that, he was coming way over the top (out to in) and slamming the clubface closed.

After pointing this out to him on the tenth tee, we took a minute to align properly. Feet and body to just off the edge of the left fairway, club pointing to the left side of the fairway.

And what happened? Boom! The ball started on the left side and faded perfectly back into the middle. He hit 6/7 fairways on the back nine and saved his card.

Paul’s alignment was ruining his chance of making a good shot.

Your alignment will depend on your shot shape

It’s a good visual. And what it’s communicating is that for a straight shot, your feet should be aimed parallel left of the target, with the clubface aiming at the target.

The biggest mistake golfers make here (when they plan to, or believe they’ll hit it straight) is to align both their body and club at the target. That’s actually a closed stance, which means the clubface is pointing left of the body and the ball will draw (or hook).

Here’s a quick rundown of how you should be aligning based on your standard shot shape.

Train tracks. Aim your clubface at the target, and your feet/body parallel left.

Aim your clubface slightly right of the target, and your feet/body further to the right. The clubface should be slightly closed to the swing path (but open to the target).

Assuming a good swing, the ball will start to the right of the target and draw back towards the target line.

Aim your clubface slightly left of the target, and your feet/body further to the left. The clubface should be slightly open to the swing path (but closed to the target).

Assuming a good swing, the ball will start to the left of the target and fade back towards the target line. 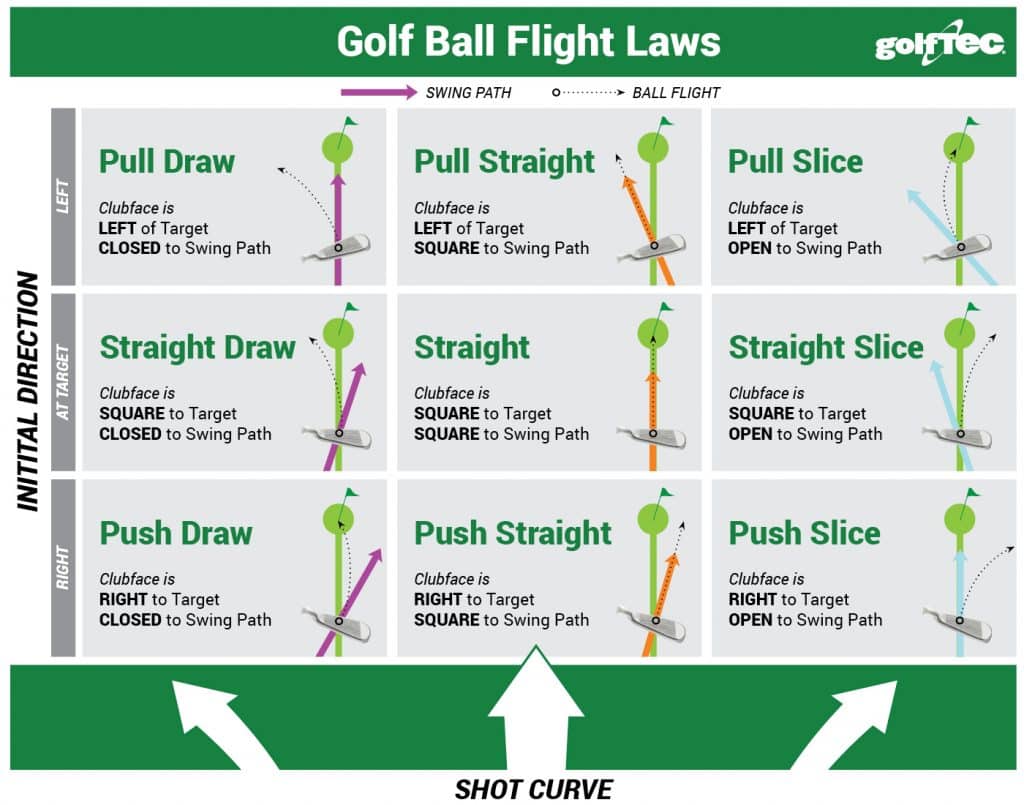 Before I move on to some of the best drills you can work on with alignment sticks to improve your aim on the golf course, I just want to make a quick point.

While you’ll probably be using an alignment stick to align your feet (as it will be on the ground), it’s important that you align your entire body to the stick.

In other words, your knees should be square to your feet, your hips square, and your shoulders square. The biggest fault I see (at address) is square feet, knees, and hips, but open shoulders.

So make sure you check that everything is lined up as it should be.

Now let’s look at some of the best alignment stick drills.

I’ve already covered train tracks above. But it’s probably the most common drill with alignment sticks, and the simplest way to start working on your alignment in golf.

This video from CBS Sports while a little cheesy, starts with a good explanation of how to set up train tracks with your alignment sticks and how to align your feet and body for the shot.

This isn’t actually an alignment drill, but it’s a great one for ball position. It can be difficult to judge exactly where the ball is in your stance when you’re standing at address. Your eyes play tricks on you.

Laying down the two alignment sticks in a cross shape (one pointing at the target and the other at the ball) is a great way to get an accurate sense of where the ball is in your stance.

Paige Spirinac demonstrates the drill 2 minutes into this video.

While hip rotation may be a misnomer (check out my article here), hip movement is definitely a critical part of the golf swing.

Putting an alignment stick through your belt loops is a great way to visually check how much your hips are rotating in the backswing.

Check out this demonstration at 1:38.

4. Using an alignment stick as an “obstacle” to fix an out to in club path

This is another great alignment stick drill from the same video as above. Basically you put an alignment stick in the ground on the same angle as your club, and slightly outside the target line.

If you swing out to in, you’ll hit the alignment stick.

5. Working on swing plane with an alignment stick

Alignment sticks are also useful training aids for working on swing plane. Again, you’re going to stick them into the ground, but this time you’re going to put one in front of you and one behind you.

If you’re someone like me who struggles with a downswing that’s coming in under plane, then this is a particularly useful drill. And of course it will also be helpful for slicers.

What are the best alignment sticks in 2020? 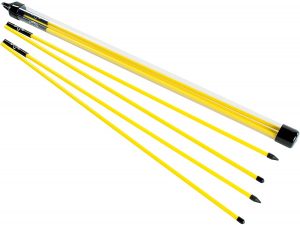 Ok, I started by saying you should go to Amazon and pick whichever alignment sticks you fancy the look of.

But, if you’re looking for a specific recommendation, I use these ones from Callaway.

They’re made of steel rather than plastic, which makes them considerably more durable. But other than that, there’s not going to be a huge difference to any other golf alignment sticks you choose. There are plenty of deals on Amazon.

They’re not particularly complex, but alignment sticks are one of the best training aids in golf.

Don’t give too much thought to which ones you buy. But do buy them!

And then get working on your alignment. As if you’re not aiming correctly, then you’re making the game harder. And golf is hard enough as it is!