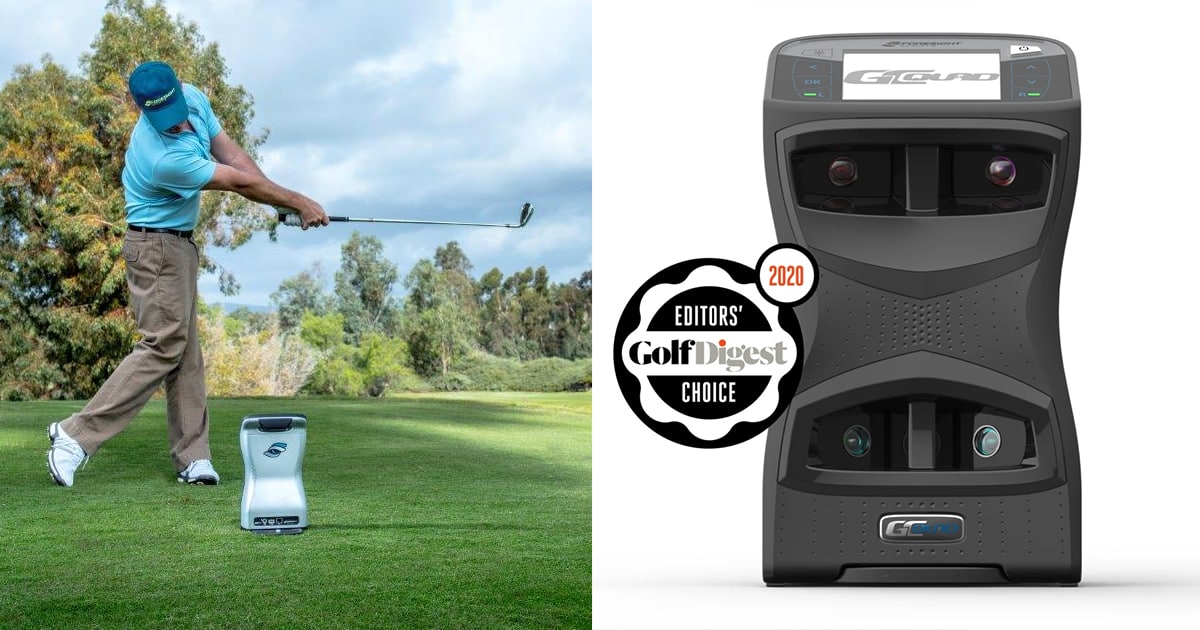 Considering buying the Foresight GCQuad as a stand alone launch monitor, or for running a home golf simulator?

This review covers everything you need to know including: measurements it takes, what’s included, specs, price and the add-ons that Foresight offer.

In summary: is the GCQuad the right launch monitor for you?

Accuracy is comparable to the industry leading Trackman in the first three categories (swing, impact, ball flight). And while not quite matching Trackman (which tracks the ball through full flight) on distance, the GCQuad runs it incredibly close.

For those looking to use the GCQuad in a golf simulator setup (FSX license required) it’s a big step up in accuracy when compared to mid range launch monitors such as SkyTrak.

Put simply, if you have a budget of around $11,000 and upwards for a launch monitor (or, around $25,000 for simulator setup), the GCQuad launch monitor is where you need to be at. It’s as close to Trackman as you’ll get without doubling your budget. 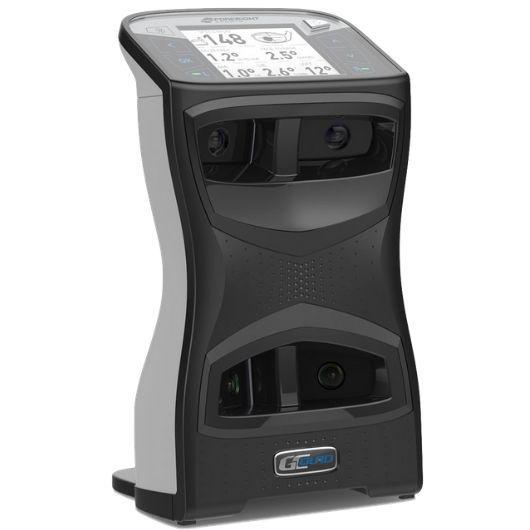 With accuracy comparable to (and in some cases surpassing) TrackMan, the Foresight GCQuad is our pick for the best overall golf launch monitor in 2021.

Check Price (Shop Indoor Golf) Check Price (Rain or Shine Golf)
We earn a commission if you click this link and make a purchase at no additional cost to you.

What is the GCQuad?

GCQuad is the latest launch monitor from Foresight, and the successor to their popular (and in many ways game changing) GC2.

While the GC2 was certainly impressive — particularly in terms of accuracy — it was somewhat limited as a launch monitor as it only captured ball data (i.e. speed, angle, spin, distance). The Foresight GCQuad on the other hand uses Quadrascopic imaging (4 cameras) which allows it to capture both ball and club data. So with a GCQuad you’ll get stats for swing path, clubhead speed, attack angle etc — basically every stat you’ll ever need to know about your swing.

These impressive additions earned GCQuad a Golf Digest Editor’s Choice Award for three consecutive years. And it’s come to be trusted by PGA professionals and tour pros such as Rickie Fowler and Francesco Molinari. Turn on the Golf Channel and you’ll see Martin Hall using a GCQuad in his demonstrations.

The GCQuad can be used as a stand-alone, fully portable launch monitor, or as part of a simulator setup.

What measurements does the GCQuad take? (and how does it work)

The GCQuad uses Quadroscopic imaging to take over 200 pictures of a golf shot through the impact zone. This 4 camera setup allows the GCQuad to capture impact from multiple angles, measure exactly what is happening through the hitting zone, and to precisely calculate how the ball will fly.

Where the GCQuad has the edge on Trackman is that this unique camera setup also allows it to capture the actual clubface at impact (something Trackman can’t do). However to take advantage of this (and the additional measurements), you’ll need to purchase the club add-on ($3,000 for the software license).

Let’s take a look at those measurements, both standard and with the club add-on.

GCQuad measurements (with the “club” add-on)

The license for the club add-on may seem expensive. But that extra tracking capability, along with what’s already there as standard, gets this as close to a Trackman as you can get without doubling your budget.

You’ve probably seen reviews on big digital golf magazines, like Golf Digest. And, we couldn’t find a bad word said about the Foresight GCQuad launch monitor; it’s touted as one of the best launch monitors for the money, and it is.

GCQuad price: how much can you expect to pay?

The GCQuad launch monitor price will vary from supplier to supplier, and will depend on which add-ons are included. It’s important to read below, as some units might look cheap. But it’s likely they come WITHOUT the FSX software license, which means you won’t be able to use it in a simulator setup (if that’s what you plan to do).

The two big optional extras are:

Most buyers go for the club head measurement add-on and FSX license, taking the total to $18,000.

And if you want to access the putting analysis, your total will run to $20,500.

You can check how prices vary by using the drop down calculator listed here.

best all round golf simulator 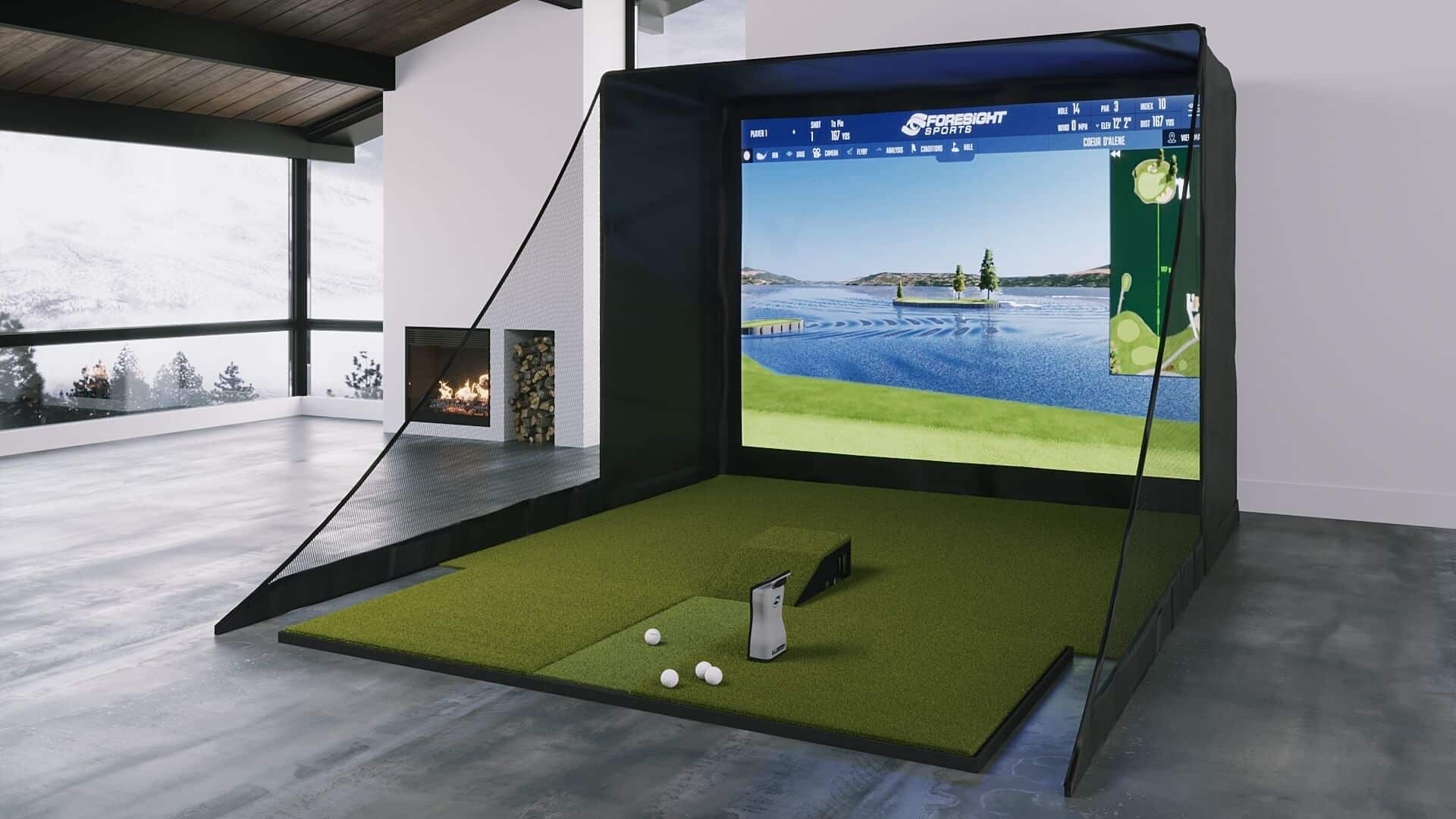 The most accurate golf simulator on the market, and our pick for this year's best overall simulator.

Check Latest Prices Learn More
We earn a commission if you click this link and make a purchase at no additional cost to you.

While the GCQuad is portable and can be used as a stand alone launch monitor, most buyers will be looking to include it in a golf simulator setup.

A golf simulator utilizing a GCquad launch monitor is going to cost in the region of $20,000. This is going to rise to around $24,000 with the club head add-on and $26,500 with the putting analysis add-on.

We’ve already mentioned two add-ons (club measurement and FSX license). The other add-on available with all GCQuad launch monitors is Essential Putting Analysis. The question is, do you need it?

Essential Putting Analysis on the GCQuad is currently priced at $2,500, so whether or not you choose to buy it, might be a question of budget. If you do have the budget and want to improve your green game, then here’s what you can expect…

The full list of available measurements from the Essential Putting Analysis add-on includes:

Which is pretty comprehensive.

What your purchase includes

As we mentioned above, check what’s included from each individual supplier. If you get caught out without a club measurement add-on, expect to pay a further $3000-4000 for it. No FSX license? You’re looking at $3000 too. Essential Putting analysis, the least essential of the add-ons, is around $2,500.

So, if you’re building a simulator setup, you’ll want to check the GCQuad (or, the golf simulator it’s bundled in with) includes the FSX license and club measurement add-ons a minimum. You can check how the package price varies by using the drop down menu here.

As standard with any GCQuad for sale, you’ll get:

For post session analysis, it’s compatible with both Android and iOS.

The FSX Software from Foresight allows you to access their network, building your skillset in single player mode, or allowing you to compete against others in competitions across the globe. And, you’ll be doing that on the best courses, in 4K resolution.

Ready to find a GCQuad for sale?

If you have $50k+, Trackman is still the most accurate launch monitor, although GCQuad runs it incredibly close. And, if you’re on a budget of under $10k, you can get a full golf simulator setup from the likes of SkyTrak.

But all things considered, at less than half the price of Trackman, the GCQuad from Foresight is our pick for the best launch monitor this year.

Check the price and buy the GCQuad here.

With accuracy comparable to (and in some cases surpassing) TrackMan, the Foresight GCQuad is our pick for the best overall golf launch monitor in 2021.

Check Price (Shop Indoor Golf) Check Price (Rain or Shine Golf)
We earn a commission if you click this link and make a purchase at no additional cost to you. 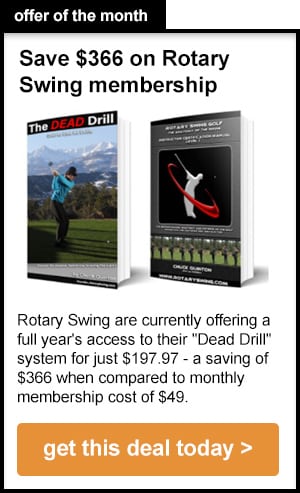