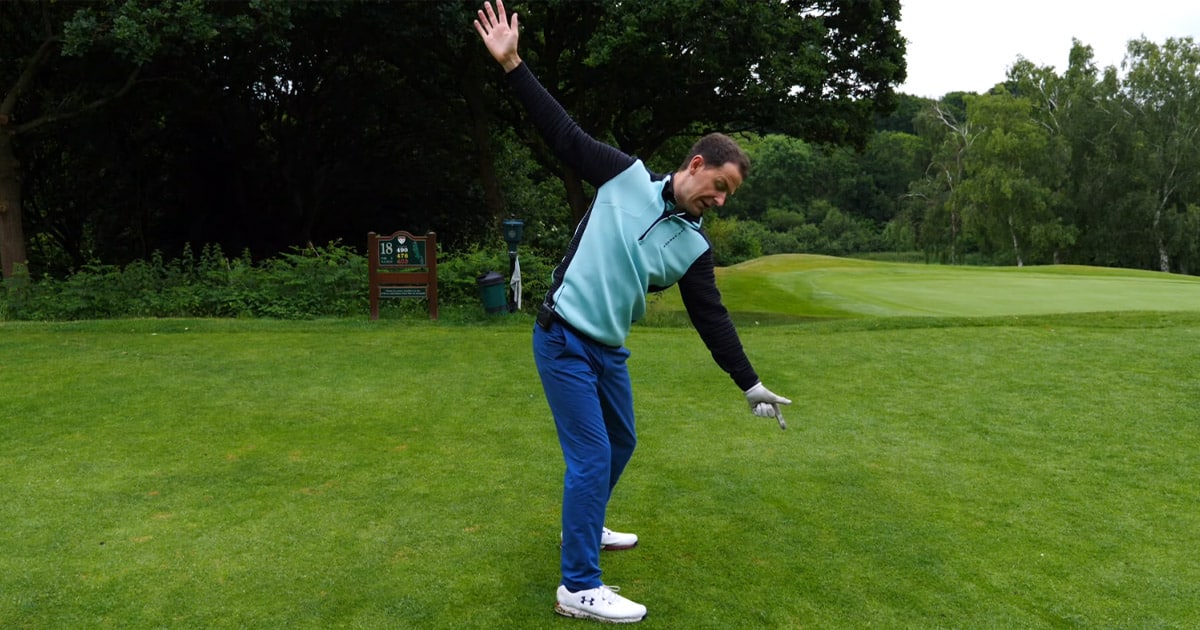 Want to work on your golf game, but can’t hit the course? We’ve got you covered.

In this guide we’ve collated some of the best drills and routines that will help you practice golf at home, and sharpen up your game.

Here’s what we’re going to cover.

First up, here are two nice drills from YouTube Channel GolfersRX, which are designed to promote:

1. better angle of attack/contact + precision with your putter
2. a square strike

In the first drill you don’t even need a ball. Simply balance 3 coins on top of each other and try to knock off just the top coin. If you can nail this drill, you’ll find your precision is much improved when it comes time to hit balls.

If you tend to push, or pull your putts this is a great drill to work on.

Next up, here’s a great drill from Dan Whittaker which will help you work on your putting tempo.

According to Dan, poor tempo will lead to problems with face control. Which makes sense.

So to counter that, work on your putting stroke in time to a metronome (you should have one on your phone).

This will help you develop more of a ‘tick-tock’ tempo in your putting stroke.

Here’s a useful routing from Peter Finch that’s designed to help you hit the ball on the centre of the putter face. Hitting the ball in the centre is key for properly rolling your putts.

Basically, you tape a coin to the centre of your putter, then create a gate with two tee pegs. But indoors you could just use a couple of lego blocks or similar to create your gate.

If you don’t hit the ball bang on centre, the coin will cause the ball to shoot offline. Which gives you instant feedback.

Here’s a fun (and helpful) practice game from Rick Shiels.

All you need is your putter, 3 balls, and 3 tins of soup!

Your aim is to get 3 balls in a row through the gate created by two of the tins. When you do, you can move the gate further away.

The best full golf swing drills to practice at home

Next up, let’s look at some drills you can do at home to work on your full swing.

If you struggle with releasing the club early and struggle to hit down on your irons, this is a helpful drill from Smash Factor Golf Coaching.

If you cast (and would have hit the ball fat) you’ll hit the towel on the way down.

Release and connection drill from Art of Simple Golf

This is a great drill to help you turn fully through the shot, generating more speed and power.

If you struggle with a flip release, or turn the club over too soon (hooks would tend to be the result), this will be a great one to work on.

By shortening the club, you’re forced to keep turning through the shot or the butt end of the club will hit your body and you won’t be able to go any further.

Practice this and you’ll have a much more consistent release.

Another excellent drill here from Smash Factor Golf Coaching. This one focuses on correct movement of the right elbow in the golf swing.

If you suffer from a flying right elbow at the top, or have difficulty getting your right elbow back out in front (i.e. stuck) on the downswing, this is the perfect drill for you.

This is a fantastic drill for those who struggle with generating power. And if you find it difficult to properly clear your hips in the downswing, then this will work well for you.

You don’t even need a club for this one.

This isn’t a specific drill, but just a general recommendation.

If you can’t hit balls, then working on positions in front of a mirror is very useful. I spent a fair bit of time recently working on my top of backswing position (I suffer from a flat backswing, and a flying right elbow).

But when I say working on positions, I wasn’t thinking of “every” part of the backswing. I figured out where I wanted to be at the top, then I let my body work out how to get there.

After putting in plenty of reps, it started to feel natural. And while not 100%, there was a definite improvement in the position of my right elbow at the top.

What equipment will you need to practice golf at home?

Obviously if you have the $$, then it’s worth thinking about investing in a golf simulator.

So really all you need is a pack of practice balls (so you can actually hit something) and perhaps a hitting net. Just make sure you have room to swing. Low hanging lights can be a particular problem!

I’d also recommend an Orange Whip trainer, which is great for working on rhythm and tempo. I included the Orange Whip in my list of the best golf training aids this year.

Not being able to hit the course sucks. But we’re all in the same boat right now, and it’s important that we look after our health and follow government advice.

The course will still be there when things start returning to normal.

In the meantime, this is the perfect opportunity to work on your swing at home. There are plenty of drills that you don’t even need a club for, so don’t stop practicing!

Just don’t be this guy…