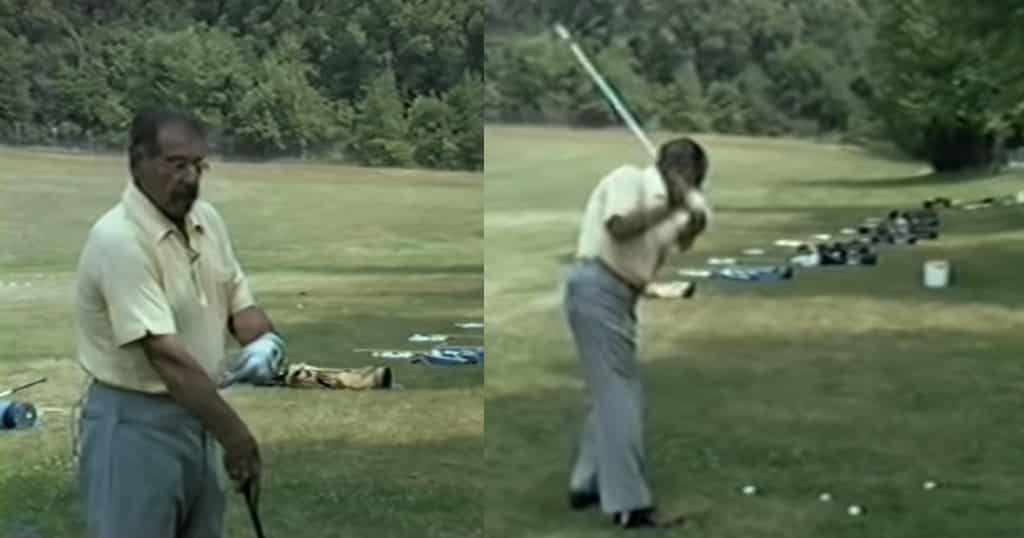 Modern golf instruction can be incredibly complicated. In fact, researching the swing can leave you feeling more confused than when you started. 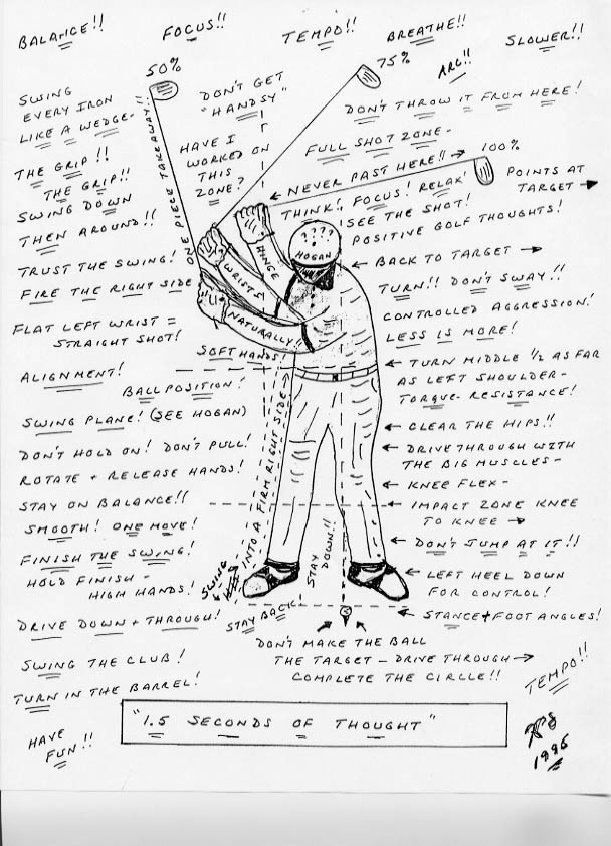 Our intentions are good (to improve our swing), but we end up cluttering our brain and freezing over the ball. Our conscious mind is getting in the way.

But consider the following questions:

When you hammer a nail into a piece of wood do you give any consideration to how long a backswing to take?

When you chop down a tree with an axe do you think about shifting your weight or bumping your hips before the hit?

Indeed, taking that last question further, would you ever NOT clear your hips prior to swinging the axe at the tree? I hope the answer here is no, as otherwise you’ll soon be playing golf with one leg.

When you chop down a tree with an axe do you think about shifting your weight or bumping your hips before the hit?

In both tasks your body instinctively knows how to move. Why? Because your mind’s focus is on the task (hammering the nail, chopping the wood), and your body is reacting to the movement of the tool (the hammer, the axe).

What Is The “Task” In Golf?

When you take a golf shot what’s your task?

Is your task to “hit” the ball?

If you answered yes, then you’re thinking about the purpose of your golf swing incorrectly. Hit it where? In the woods? Into the ground?

In fact, your task is to send the ball to the target.

And the golf club is the tool you use to send the golf ball to the target.

So before moving onto the specifics of how to do that (and they are very simple) that’s the first mental re-adjustment you may need to make. I’ll repeat because it’s so important:

The goal of every shot in golf is not to hit the ball, it’s to send it to the target. Or in other words, your target is your target, not the golf ball.

I’m about to sum up the backswing and downswing in two sentences.

I’m paraphrasing from what is without doubt the best golf instruction book of all time, Manuel de la Torre’s “Understanding The Golf Swing”:

Backswing: Use both hands to swing the clubhead in the direction of the right shoulder

Downswing: Use both arms to swing the whole club in the direction of the target

And that, in a nutshell, is the golf swing.

Assuming a solid grip and setup (very important), if you do those two things correctly your shoulders will turn the right amount for you. Your hips will get out of the way. Your weight will shift fully to the front foot after impact.

All the good body positions you see in stills from the classic swingers will happen, and you won’t have to give them any conscious thought.

The golf swing really is (or can be) that simple.

At this point, I’m going to strongly advise you to buy the book as it really is the only one you’ll need. Manuel de la Torre explains this better than I’ll ever be able to. And he also goes into a lot of detail on grip and setup, which as I mentioned above you’ll need to work on in addition to the “swing”.

The golf swing really is (or can be) that simple.

But now I’ll go into a bit more detail on how I “feel” these moves. And also some ways the instructions (which seem incredibly simple and are) can be misinterpreted.

Feeling The Backswing As A Throw 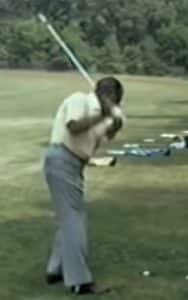 Everyone “feels” things in a different way, which is why I recommend buying the book for the full instruction.

But for me, I feel the backswing as a throw.

I keep my wrists extremely loose (which allows them to cock/set) and feel that the first part of my takeaway is using my hands (both of them and not the arms) to “throw” the clubhead in the direction of my right shoulder.

The throw feeling only lasts until the end of the takeaway, at which point I allow the momentum of the swing to take over and my hands and arms feel passive to the top.

If you’ve read the “low and slow” instruction, this may feel like you’re picking the club up. But you’re not. Throw the club up with loose wrists and check your position at left arm parallel in a mirror. The club will be perfectly on plane and your arms will be in front of your chest (where they should be).

During the backswing the club feels light, but I’m aware of where the clubhead is at all times. If you can’t feel the clubhead check your grip pressure as it may be too tight.

Again, it’s a throw to get the momentum, and once the club is moving I simply allow it to swing to the top. Think of starting a child on a swing. You give the swing a push to start it moving and then let it swing, you don’t push them all the way to the top.

It’s also a fairly quick motion. But that’s not a bad thing as most of us amateurs have backswings that are too slow.

During the backswing the club feels light, but I’m aware of where the clubhead is at all times. If you can’t feel the clubhead check your grip pressure as it may be too tight.

I don’t consciously think of turning my body or shoulders, but they both turn as they should. The movement has some similarities with the “no turn” part of Monte Scheinblum’s “No turn, Cast” drill (below).

Again this is my “feel” as Manuel De La Torre’s specific instruction is to start the downswing with the arms immediately.

But for me, I “feel” like I don’t start swinging my arms towards the target until the club starts getting “heavier” on the way down. It’s difficult to describe in words (again, you really should buy the book), but there’s a split second before I feel I’m ready to swing the club towards the target as fast as I can.

Effectively what’s happening here is I’m shifting slightly to my left side and shallowing the club, but it’s not something I’m consciously doing. My feeling is just to be patient in transition with the weight of the club being my trigger to use my arms to swing the club to the target.

Applying Speed At The Bottom

I’ve found that the faster I swing towards the target after transition, the better the strike.

Here’s what I’m NOT doing:

And the last point there is an important one. As my target is not the golf ball (it’s the target) I’ll automatically “release” at the target. I’m not trying to hold onto my angles. But the focus of the swing being my target will mean my club is releasing through the ball not at it. On a still this will look like I’ve “held my lag” and give me forward shaft lean. But that’s certainly not what I’m trying to do.

Possibly one of the best ways to experience the difference between swinging at the ball (bad) and swinging to the target (good) is to try the “throwing clubs” drill. This video from Shawn Clement demonstrates how to do it.

The Clubhead And The Club

There’s a key point in Manuel De La Torre’s instruction that I missed at first. Seems crazy when the golf swing is summed up in literally two sentences, but from reading about other’s experience on this excellent GolfWRX thread it seems I am not alone.

On the backswing you swing the “clubhead” in the direction of the right shoulder, not the club.

Why is this distinction important?

Because when I was first working on this I was trying to swing the whole club over my right shoulder, which ended up with me collapsing my left arm and losing width.

When the focus is on instead swinging the clubhead over the right shoulder, you’ll keep the width of the arc, which is important for speed, power, and consistency.

One “feel” De La Torre recommends for this (and it’s one you’ve probably read before) is to keep the hands as far away from the head as possible at the top of the backswing.

So again to reiterate, on the backswing your focus is on the clubhead, not the entire club.

By using the arms to swing the whole club in the direction of the target your wrists will uncock at the optimal time to release maximum energy and speed into the ball.

On the downswing the opposite is true.

Instead of trying to swing the clubhead to the target, you want to feel like you’re swinging the whole golf club (handle, shaft, and clubhead). The purpose of this is to retain wrist angles into the downswing, although as I mentioned before you shouldn’t feel like you’re purposely holding anything, just not intentionally letting anything go either.

By using the arms to swing the whole club in the direction of the target your wrists will uncock at the optimal time to release maximum energy and speed into the ball.

The “Arms” Means The Upper Arms

For the downswing De la Torre insists that it is the arms that control the motion. However, he also specifies that arms means the upper arm from the shoulder to the elbow joint. Forearms should not be actively involved.

I’ll be honest, I have a hard time feeling this exactly, but the quality of strike would suggest I’m doing it right.

My Own Experience With The Manuel de la Torre Method

I’m currently on my second round of adopting the Manuel de la Torre swing method.

Which sounds like a contradiction. If it works so well and is so easy to learn, why did I stop using it in the first place?

There are two reasons:

But as mentioned I’m back on the Manuel de la Torre method and the last two and a half rounds I’ve been striking my irons in particular exceptionally well.

I say two and a half rounds as I actually switched back to it in the middle of a round where I was playing particularly badly. And it made an instant improvement to my game.

Do I still hit bad shots?

Yes. Of course I do. Golf is not a game of perfect.

But that’s because I made a bad swing. It’s not because the swing is wrong.

If you adopt the Manuel De La Torre simple golf swing your goal on every shot should be to send the golf ball to the target.

My course of action from here (or certainly what it should be) is not to change my swing. It’s to keep practicing and improving this swing so I get better at it. And over time the ratio of good shots to bad shots should steadily improve.

If you adopt the Manuel De La Torre simple golf swing your goal on every shot should be to send the golf ball to the target.

And to do that you should:

If you hit a bad shot you didn’t do that correctly. And no other diagnosis is necessary.

If that’s not the simplest swing in golf, then I don’t know what is.

Buy “Understanding The Golf Swing” by Manuel De La Torre here, then watch the great man teaching his swing in these fantastic videos.