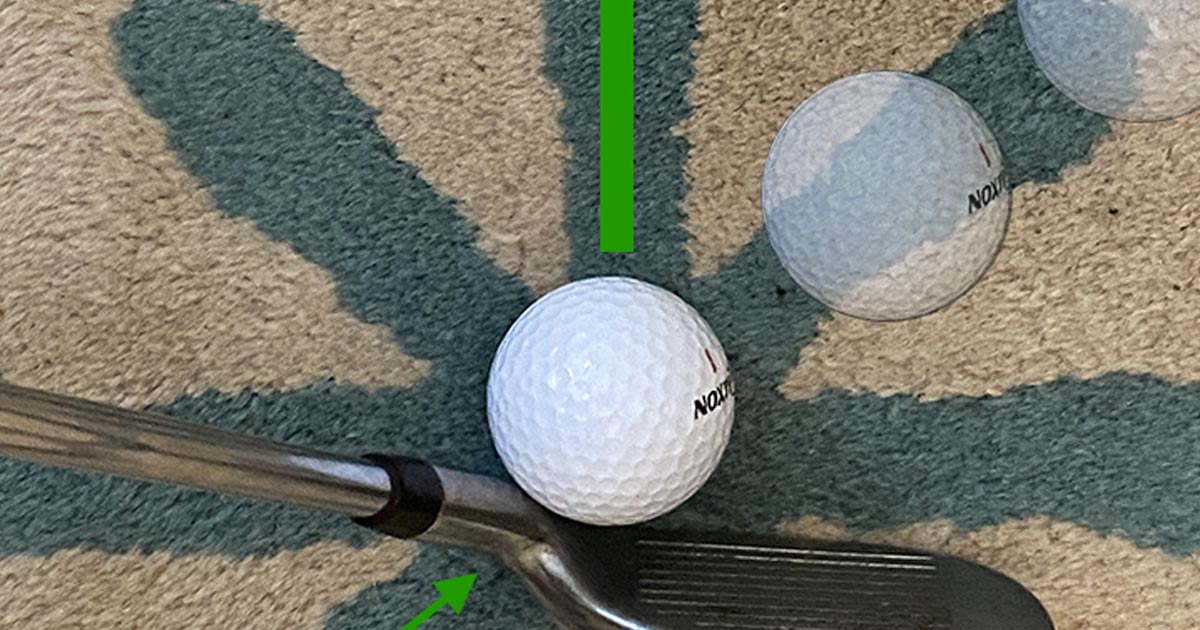 Shanks. Six little letters that put fear into the heart of any golfer.

They’re like a disease. You might not shank the ball for months, then you shank one, then another, and another…

About two years ago, I had a severe dose.

At the time I was driving the ball better than ever. But every iron was a shank. And I mean EVERY SINGLE ONE.

It was absolutely soul destroying to be in the middle of the fairway off the tee, 100 yards out, and then end up with a triple on my card.

It started in the middle of a round. I was playing well, then out of nowhere shanked one…

…and it took me 3 months to get rid of them.

But the good news is I’m generally shank free now.

So in this guide I’m going to deep dive into what causes the shanks, and how to rid them from your game for good.

What Is A Shank?

A shank is when the golf ball impacts the hosel rather than the clubface. This causes the ball to shoot off to the right at a 45 degree angle. 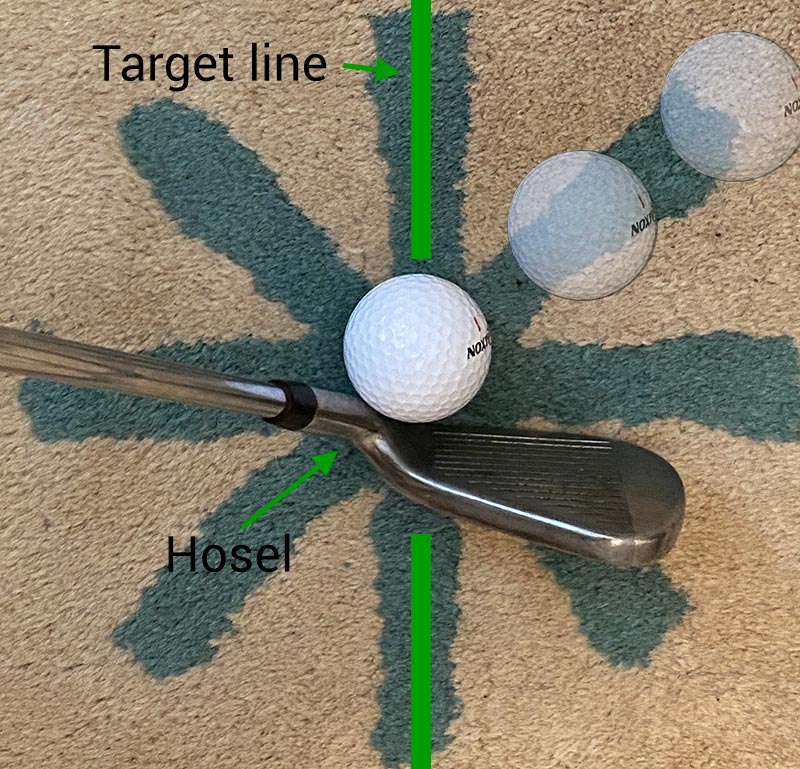 It’s pretty much the most destructive shot in golf.

What Causes A Shank?

As mentioned above, a shank is caused by the hosel coming into contact with the golf ball.

But really, what we want to know is what causes that to happen in the first place.

I’ve included some of the common causes of shanks below.

To diagnose what’s causing your shanks, you should video your swing in slow motion to see what’s happening at impact.

Let me start by telling you what my problem was, as it’s probably one of the most common causes.

Like many things in golf, my shank nightmare started after I had “fixed” something else.

My natural shot shape is a draw, but a few months prior to getting the shanks my draw had been verging on a hook.

It was becoming unplayable and I was having to aim way right to get the ball to finish on the target line.

So what did I do?

I started consciously opening the clubface in my backswing. In fact pretty much as soon as I took the club away, I’d open the face.

And for a while this worked perfectly. It was pretty much my only swingthought.

I was in the goldilocks zone. I was opening it just enough to counter my hook.

But then, I guess I overdid it. And my clubface started coming into the ball way open.

In other words, I was lagging the hosel. Open up your clubface and you’ll see that approaching the ball with the face open will mean that the hosel is probably going to hit the ball first. 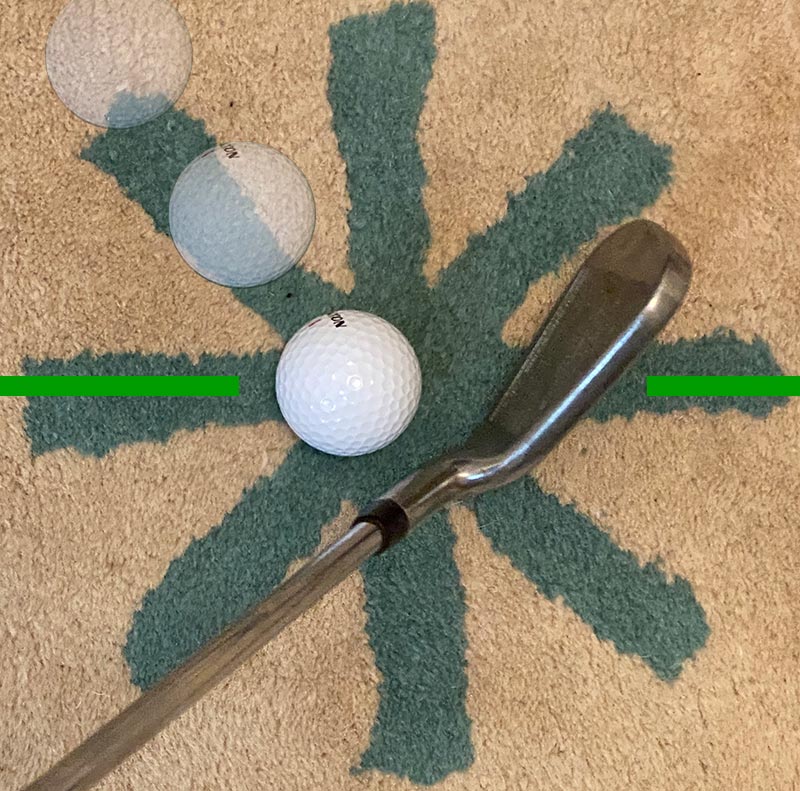 It was only when I filmed my swing in slow motion that I could see exactly what was happening at impact.

And for me the fix was simple. In the short term, I had to feel that I was actively closing the clubface on the downswing. A reverse motorcycle move.

But I knew this wouldn’t be a long term fix, and I’d soon start overdoing that and hooking again.

So I started undoing the ingrained opening of the face in the backswing.

My focus was on keeping the club looking at the ball for as long as I could during the takeaway.

Hands Moving Too Far Away From Your Body

So in my case, the shanks were caused by the hosel getting to the ball before the clubface.

But you can still shank the ball just fine with a square face.

If your hands move too far away from your body during the downswing, your strikes are going to start getting closer and closer to the heel.

This can be masked for a while if you’re raising the handle up excessively at impact. Your hands will be further out, but the steeper shaft will mean that the clubface is closer to the hands relatively.

But it’s definitely not the best way to hit a golf ball.

Work on keeping your hands closer to your body during the downswing.

You’re probably going to have to really slow down your swing for a while to ingrain this as the forces of the downswing will naturally pull your hands out. And the higher the swing speed, the higher the outwards force.

The result here is the same as hands moving out excessively (clubface further out than address), but the cause can be different.

As this time your hands might be staying reasonably close to your body, but your whole (lower) body has moved closer to the ball.

Which means that again, you’re going to have to raise the handle excessively to avoid hitting the heel.

Check out my guide to fixing early extension.

Standing Too Far Away From The Ball At Address

But one of the most common mistakes golfers make is thinking “I’m hitting the heel, so I should stand further away”.

So they move further and further away at address.

And then what happens is…

On the downswing, they have to reach for the ball, weight goes out to the toes, and the clubface moves further out. Which of course introduces the heel.

Your body will be forced to move backwards (weight wise) on the downswing to make room for your arms to swing through.

By standing further away, your body thinks it has to move closer to reach the ball. So do the opposite.

More Fixes And Drills For Curing The Shanks

If you’re still struggling with the shanks here are some more drills and fixes you can try.

Like the one above, some of them will sound very counterintuitive… but give them a shot!

1. Address The Ball On The Heel

You’re trying not to hit the heel, so why would you set the club there at address?

Well, think about it logically.

You might think that if you’re shanking, you should address the ball off the toe. But what’s your subconscious going to think about that?

“Hey body, arms, and hands. We don’t want to hit off the toe, so let’s move the club further out on the downswing to hit the centre of the face”.

And just an inch too much, that’s going to mean a heel shot. And a shank.

On the flipside, by addressing off the heel, your subconscious is going to think:

“Woah. We’re going to hit the heel. I better pull in the hands in on the downswing and make room to hit the center.”

An inch too much there and you might hit the toe. Which is not ideal, but I’d take a toe hit every day over a shank!

Sounds wrong. But give it a try.

2. The Miss The Ball Drill

This is a great drill from Monte Scheinblum which has all sorts of benefits on top of fixing shanks. For example, it’s a great one for early extension.

Basically, address the ball as normal, swing, then try to miss the ball on the inside.

Your body will be forced to create space on the downswing.

Check out the drill below.

Another fantastic drill from Monte.

The result is similar:

You’re going to miss the ball you setup to on the inside. But this time you’re going to actually hit another ball in the process.

And here’s me practicing it on the range…

If your shanks are caused by an open clubface, then this drill from Rotary Swing will help with squaring up the face.

You’re going to hold the club in your left hand only and take half swings (parallel to parallel) focusing on your watch:

This should help to ensure your face is square to the target at impact.

If you don’t have a watch you can use the logo on your glove.

Note: this drill is promoting a roll release through impact. It’s pretty much what I implemented to cure my shanks, but I have since moved to a more stable clubface through impact and squaring the clubface by getting my hips more open.

5. Hit A Shank On Purpose

The final drill (or thought) is another outside the box one.

Can you hit a shank on purpose?

Really try and hit that ball off the hosel with all you’ve got. Exaggerating this can help you feel what it is that you’re doing when you shank the golf ball.

And if you CAN do it, then perhaps you can also NOT do it?

Shanks can be caused by a multitude of swing faults.

But the most common faults are moving closer to the ball (with your body, hands, or both) and lagging the hosel.

Figuring out what’s causing your shanks by recording your swing in slow motion is a good place to start.

Then choose the relevant drill or feel, and spend some time working on it at the range.

1. Never “think” you’re going to shank when you’re addressing the ball, or tell yourself “don’t shank this one”. Your mind doesn’t respond well to negative commands.
2. If you shank one on the range, don’t immediately start beating balls to try and fix it. You’ll probably shank your way through the whole bucket. Instead, take a 5 minute pause and get it completely out of your mind.