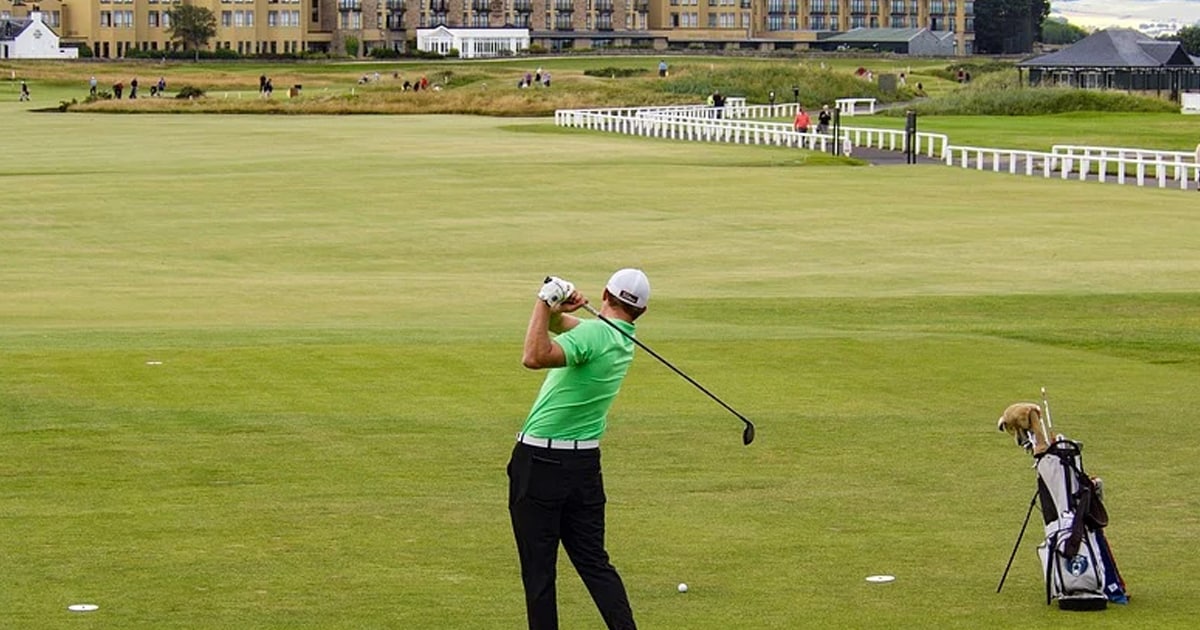 Fed up slicing the golf ball? You’re in the right place.

In this article I’m going to run through everything you need to know to get rid of the dreaded banana ball for good.

We’re going to dig into exactly what it is that causes you to slice the ball, and the best drills to work on to fix the problem.

What Is A Golf Slice?

Note: For the rest of this guide I’m going to use right handed examples. If you’re left handed, then just reverse the instruction.

What Isn’t A Slice?

Just to be clear, if your ball starts right and stays right (without curving) you’re blocking the ball, not slicing. That’s a problem that’s generally caused by coming too far from the inside, which in most cases (although not all) will be the opposite of what a slicer is doing.

It can be equally as destructive, but it’s a different fault.

What Causes A Slice?

In simple terms, the ball will slice if the clubface is open to the club’s path at impact.

Which means that even if your clubface is pointed left of the target line (closed) at impact, if your club is travelling on a path that’s even further left your golf ball is going to curve to the right.

This is what can be an absolute killer for slicers.

It seems intuitive that if you’re slicing the ball you should aim left to compensate .

Your brain is trying to save the shot, but actually it’s just made the problem worse.

On that note, before we get to other fixes, here’s a quick one to try.

We know that our brain will panic, sense we’re aiming left, and try to save the shot by squaring the clubface. So do the opposite.

Doesn’t always work, but in some cases your panicking brain will close the face to try and square it to the target. The result, a clubface that’s closed to the club’s path, and a push draw.

I’ve seen golfers who have sliced the ball their entire life fix it in one shot by just going against their instincts and aiming right.

Give it a try.

What Causes The Leftward Club Path?

Assuming you’re not aiming left, the leftward club path will generally be caused by coming over the top of the swing plane.

Your clubface has travelled out past the ball and is hitting it on the way back.

Over the top has a bad rep. But being slightly over the top (and out-to-in) isn’t going to destroy your game. Believe me, being stuck and coming too far from the inside is worse.

It’s when the over top move becomes excessive and the path is way left that you’re going to hit real problems.

If that’s you, then the simplest thing to do is be patient in transition. Start your downswing with a small shift (hip bump) to the left before swinging your arms through. That will stop your shoulders from spinning out way over the swing plane, and help to neutralize your path.

If you’re still out-to-in, then you should see more of a fade than a big ugly slice. And there’s absolutely nothing wrong with a fade, it’s the preferred shape of some of the best ball strikers of all time.

Now let’s look at some specific tips and drills for fixing your slice.

How To Fix Your Golf Slice

Honestly, I know it’s the most exciting tip in the world, but the first thing you should check is your grip.

Strengthening your grip by rotating your lead hand clockwise (so you can see more knuckles) will prevent you being able to open the face so much on the downswing. And it will also promote a closed (or closing) face.

Sometimes that’s all it takes to fix a slice.

So before you do anything else, try strengthening your grip.

Here’s Savannah and Shawn Clement discussing the benefits of a strong grip.

Note: if you’ve been aiming left previously to compensate for your slice, aim down the middle, or if anything slightly right after strengthening your grip. If you end up aiming left with a closed clubface you’re going to be entering into the world of pain that is pull hooking. And believe me, if you start to pull-hook you’ll be begging for your slice to come back!

2. Actively Close The Clubface On The Downswing

A slice is caused by a face that’s open to the path.

So try actively closing the clubface on the downswing by rotating your hands clockwise (to the left).

Something I should point out here is that for most golfers, this probably means starting to close the face immediately after transition. The downswing happens so fast that if you wait until you’re close to impact before closing the face, by the time your brain sends the signal to your hands, you’ve already hit the ball.

Unfortunately this does introduce an element of timing into your swing, so you’ll need to experiment. Start closing the face too late and the ball will continue to slice, do it too early and the ball will start to hook. Find your goldilocks zone.

Note: this is a good example of fixing a fault by “doing the opposite”. If you can exaggerate the closing face and get your ball to start hooking, then you’ve effectively fixed your slice and just need to dial it back until the ball goes straight.

3. Work On Your Path

For maximum speed and power, you want a path that’s inside-square-inside. The square part is when you hit the ball.

The first two fixes are bandaids to stop you slicing. But working on your path is actively trying to improve your golf swing (with the associated benefit of eliminating your slice).

Rather than focusing on the how here, I’ve found it’s best to give your brain a task.

The best one? Put an obstacle in the way that you’ve got to avoid on the downswing.

Place a headcover just behind and outside the golf ball.

If you swing over the top and come out-to-in, you’ll hit the headcover. To hit the ball, you’ll have to come from the inside. There’s no other way to do it.

That’s a lot simpler than “shift your weight”, “drop your hands”, “flatten the shaft” etc right?

Here’s a demonstration using range baskets instead of a head cover.

But just like with the actively closing clubface we’re going to use exaggeration to improve our swing.

Many over-the-top slicers will take the clubhead too far inside on the backswing, meaning they’ve got nowhere to go but outside on the downswing.

So try reversing the loop. Take the club back on an exaggerated outside path on the backswing, then loop it down to the inside at the start of the downswing.

And do it in slow motion.

You can hit balls, but make sure you’re swinging no-more than 40-50%. If the ball travels 30 yards that’s absolutely fine.

The goal here is to get the feel of what it’s like to take the club away on a less inside path.

And guess what? If you’ve been excessively inside with your takeaway for years, what “feels” like way outside will sometimes actually be perfectly on plane.

Here’s a good (if a little long winded) explanation.

Note: the ultimate goal here is not an outside takeaway. It’s an on plane, square takeaway. But exaggeration will help you feel the move. Again overdo it, then pull it back. Goldilocks.

5. Make Sure Your Clubface Is Square At Setup

Think your clubface is square at setup? It might not be.

As you’re standing side-on to the ball, what looks like a square face to you might actually be open.

Ask a friend to check if your clubface is actually square.

Note: some golf pros and instructors advocate a clubface that’s slightly open at address with the irons. The idea being that as the clubface is half an inch or so behind the ball, at impact it will be square. It makes sense (and it’s difficult to argue with Jack Nicklaus) but as a slicer it’s probably not the best tip in the world for you. You want a square face at setup.

6. Setup Six Inches Behind The Ball With The Driver

This tip worked wonders for me, and I used it for around 4 years with my driver. Although I’ve recently gone back to setting up directly behind the ball due to another swing change I’m working on.

The idea is that instead of setting up with the clubface directly behind the ball with your driver, you sole the club around 6 inches behind it (directly beneath your sternum, which should be bottom of your swing arc).

What does this do?

Firstly it promotes an upwards angle attack which is desirable for maximizing launch and distance with the big stick.

But more importantly for slicers it helps to keep shoulders closed or square at address.

Due to the forward nature of the ball position with the driver, addressing the ball with the clubface directly behind can lead to reaching and open shoulders. And open shoulders means a club path to the left, which of course combined with an open clubface, leads to a slice.

Important: before taking your final address position hover your club at the height of the ball directly behind it and make sure that you’re aligned to the middle of the clubface. When you sole the club 6 inches behind it will probably then look like it’s inside the target line, but at impact, it won’t be (it will be further forward and higher).

Ok, this isn’t exactly a tip.

But if all else fails, it’s worth looking at your equipment. Most modern game improvement drivers will have a draw bias setting (either an offset face, or a strategically placed weight).

And many golf club brands also have models in their range specifically designed to minimize sidespin and straighten up ball flight. For example, Ping’s G410 range of drivers includes a SFT (straight flight technology) option.

It’s also worth getting properly fitted for your driver.

For example if you’re playing a shaft that’s too light for your swing speed the kick-point may be suboptimal leading to an opening of the face.

Sometimes it is the arrow, rather than the Indian.

You CAN Fix Your Slice

If you’ve spent years sending your ball spinning off to the right on every tee box you might think you’ll never be able to fix your slice.

I was a slicer (a push slicer at that) for a long time, but these days it’s very, very rare for me to lose a ball to the right unless I push it.

Personally I fixed my slice by strengthening my grip, setting up 6 inches behind the ball, and over time, working on my swing path.

As I already mentioned many slicers slice because of a misconception on why the ball slices. They try and fix it by aiming more left and just make the problem worse.

But you don’t need bandaids. You need the knowledge of why you slice, and the tips and drills to fix it.

And now you have them, it’s time to hit the range 🙂